So this morning I was reading through my own book “Neolithic Shamanism,” which I co-wrote with Raven Kaldera, looking up some random information on the Norse Wind spirits and Gods which I’d forgotten and I came across this line:

After the initial “oh shit, I wrote that?” lol, I just sat back a bit floored. Now I’m an Odin’s woman; I know that Odin gave us breath. After the creation of the first mortals (Ask and Embla) from drift wood, at the beginning of the worlds, the three Brother Gods, Ođinn, Lođur, and Hoenir bestowed the gifts of breath, warmth and hue, and intellect/sentience respectively on them. Odin came last, (and yes I alternate between the Norse and Anglicized spelling of His name for convenience and out of habit) breathing that first life-giving breath into their bodies and this is what began the unfolding of their wyrd. I know that, but I don’t think I ever stopped to really think about what that means.

In my article “In the Beginning,” I start parsing out the deeper theological meaning inherent in our cosmological tales. I think all such stories are encoded means of narrating and conveying the worldview of a particular tradition. They help elucidate the lens through which devotees of that tradition engage with every part of their world. These stories structure our world so there can be a lot to unpack in each of them.
In looking at the creation of humanity, we are given a moment out of time, a moment in the narration of the creation of being, wherein the Gods bestow particular gifts. Each gift given fetters us to both temporality and materiality – corporeal being. These gifts likewise make the unfolding of wyrd possible. The gift giving is a process of animating corporeality and attaching it to wyrd – the gift not just of tangible gifts of breath, blood, and sentience, but of fate and the means to change and be changed by it. With temporality (and wyrd) comes the gift of evolution, of transformation, of death, and of the ancestors. Time becomes conceptual.

What caught me this time in contemplating Odin’s initial gift to us, is the direct link between that primal breath and life, and then life and wyrd. I’ve always assumed that the Gods were subject to Their own wyrd, but reading this makes me wonder. If active wyrd is tied to corporeal life, if it comes into play, if it begins to take effect on/for a person at the moment that person draws breath then it is a thing tied specifically to both corporeality and temporality – to neither of which are the Gods subject. Creation, which includes most specifically the creation of matter is a process, which in and of itself implies that linkage to temporality. In and of Themselves, the Gods have no need of that. They precede its creation. I know we have stories of the Gods being born, but I think what we’re really dealing with, at least with the Norse creation stories, is the moment a Holy Power takes on certain names and forms, parses out a portion of its own, independent being, narrows itself for communication and interaction with us, a necessary concession to beings fettered by temporality and corporeality i.e. humans. That…that is hugely profound. There is so much, after all, of what every Deity is that is beyond our capacity as corporeal creatures to comprehend.

To say that Odin breathed life into the first humans, and to equate that as binding them to wyrd (which I do and it does – a child’s wyrd begins the moment it draws breath. Until then, there is no point of connection. Until then, there is only potential and abstraction. Birth mirrors the initial moment of the creation of materiality and its yoking to time. Our ancestors can work off their wyrd, correct it, strengthen it, and help us to do the same, but there is no new wyrd being generated, no new layers being created. We can inherit wyrd from those who have gone before us, but they are not still creating further wyrd. There does seem to be a correlation between life and the beginning of active wyrd vs. death and its ending or tying off).

So if that is the case (and I believe it is), then all the stories we have hinting that Odin and the other Gods cannot escape wyrd, must of necessity be interpreted differently. The question must then be asked: whose wyrd?

If wyrd is the one force to which even the Gods must bow (as our lore teaches) and if wyrd is also tied specifically to temporality then we are dealing with cosmic law. We are dealing with a force that is not bound to the Gods, but rather us. We are dealing with a framework of causality and consequence generated by us, our choices, the choices of our ancestors, and descendants (and overseen by the Nornir). It’s the inherent infrastructure of creation. We’re also dealing with the loop-hole of free will. I posit that it’s not so much that the Gods are bound by Their own wyrd, but that they’re bound by the law of ours. They cannot undo that which we create for ourselves because to do so would completely undermine free will and one chip in the edifice of the structured order of creation would risk undoing the whole thing.

All of which demands reinterpretation of the forces surrounding Baldr’s death, usually presented as a matter of it being impossible for Baldr to escape His wyrd. (This may be another forthcoming article. I’m not going to dwell on it right now). It also demands reevaluation of exactly what Odin was doing when He gave us that animating breath. I can’t help but find it even more powerfully significant that one of the defining moments of the Odinnic canon occurred on Yggdrasil, when He hung for the runes. Yggdrasil is where Urda’s well lies, and where the Nornir lay and order the threads of wyrd we pattern. There is a deeper connection to Odin as shaman-god, creator-god, murderer of His ancestor Ymir, and bringer of fate and destiny to humanity. To be bound to wyrd, after all, is to be bound to that against which we may both measure and challenge ourselves. Be our wyrd good or bad, we are defined by how we meet it. 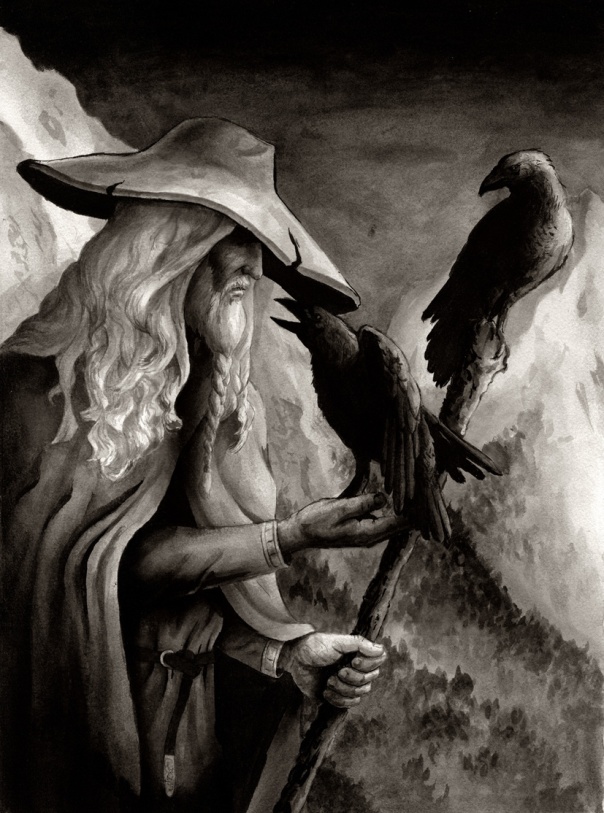