Sekhmet is NOT a “Mother Goddess” 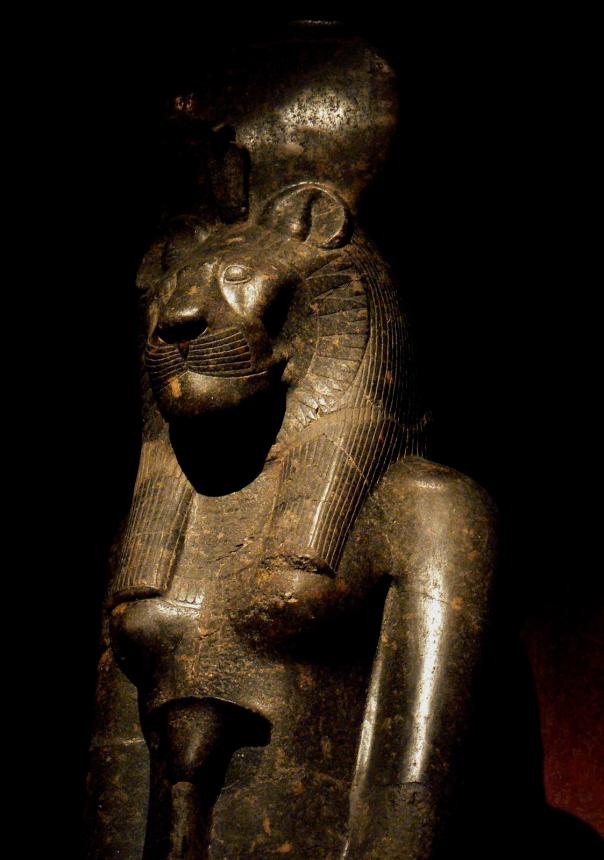 I’ve been reading quite a bit on Sekhmet lately. She was the first Goddess that ever came calling for me and I was ordained Her priest in 1995. Eventually, right around the time I was ordained, She directed me toward Odin, but I still have powerful devotional ties to Her. She’s one of the Goddesses that is bright and shiny and very popular in certain segments of the Pagan community and frankly, I think She’s one of the Goddesses that gets shown the most disresepect. To put it bluntly, I really get tired of people taking Warrior Deities, like Sekhmet (perhaps especially Sekhmet) and trying to turn Them into lunar, and/or “Mother Deities.” She is not, god damn it, a Mother Goddess. She may be the mother of the God Nefertem by some theologies but that does not mean She is a “Mother Goddess.”*

I was going to write about this at length but I think my colleague Ptahmassu Nofra-Uaa said it better than I ever could:

This false idea of Sekhmet as a squishy, cudly lion or generic “Mother Goddess”, crone, wise woman, etc., comes from the New Age hippie generation of the Goddess community who are unable to approach the authentic textual sources we have which confirm that the ancient Egyptians venerated and very much feared Sekhmet as destructive goddess known to bring plague, storms and Her “Seven Arrows”, which could annihilate humankind. Sekhmet was NEVER the “Mother Goddess”, crone or wise woman to the Ancients. She was a war goddess FIRST, and a destroyer. Her reputation as a healing goddess emerges later, but the warrior goddess always predominated, and does to this day.

I was having just this very conversation yesterday with the Arch Priestess of Temple of Isis Nevada, and she was expressing her disgust for the New Age view of Sekhmet as the crone, wise woman, shaman/ healer archetype, which has absolutely nothing to do with the very real history of how this great goddess has manifested in the historical record, in the authentic texts and temple inscriptions. We know the Egyptians feared Sekhmet, and did everything to appease Her wrathful nature. They knew that Sekhmet is as likely to curse as She is to bless, to kill as to grant life or heal.

I was ordained as a Priest of Sekhmet by Lady Olivia Robertson, and when she performed my anointing, she said to me, “like Sekhmet, go forth to combat evil!” Sekhmet has always been a warrior, a destroyer and a goddess of divine vengeance. She destroys those who dishonor the names of the Gods, those who refuse to live by Ma’at, and those who become enemies of the Gods. Sekhmet is not a Goddess of mercy or kindness in a human way we would recognize. She gives no quarter, She does not stroke the ego or make us feel better in our ignorance or complacency. She wakes us the fuck up in the rudest manner possible, and She is truly a terrible goddess, a holy terror. She cannot be other than feared and venerated without conditions. She receives our pain and suffering as an offering, and She may very well be our annihilation. (–Ptahmassu Nofra Uaa, quoted with his kind permission).

I see the same thing with other Warrior Goddesses like the Morrigan. These Goddesses are immense and fierce and I can understand the impulse today to soften Them, but I think we need to diligently resist that impulse. These Goddesses aren’t there to make us comfortable, They’re there to be venerated and doing so can be a life-changing practice.

*and this is not even touching on the insipid way we tend to present Goddesses Who ARE Mother Goddesses.