I created the Yuletide Shopping Guide in part because Yule is one of my favorite times of year. The guide features items polytheists would enjoy seeing in their homes or under their tree this yuletide. All with the hope of spreading some holiday cheer in a difficult year by finding items that can help feed our devotions within our polytheistic traditions, but also to hopefully along the way lift up some of the artisans in our midst too. So far I’ve included resources for crafters, makers, and DIYers: cookie cutters, crafting molds, fabric (Mesoamerican, Egyptian, Greek, Northern Europe), machine embroidery designs, cross-stitch and embroidery patterns, as well as knitting and crochet patterns. I’ve also highlighted some items on a Krampus theme. I’ve spotlighted items you can use to deck the halls and trim the tree.

There were some artists and artisans who offered a range of product across pantheons, or whose work focuses on a tradition that I didn’t have enough items to spotlight on it’s own. So I highly recommend that you carefully peruse the spotlighted artists and artisans in my miscellaneous Part 1, & Part 2. You will find offerings encompassing a vast array of traditions: Norse, Slavic, Celtic, Roman, Greek, Egyptian, Hindu, Polynesian, Mesoamerican, Minoan, Assyrian, Sumerian, Welsh, Asian, Native American/Inuit, and more!

ArxMercatura based in the Ukraine offers items for modern practitioners of Cultus Deorum with religious statues, libation bowls, shrines, Lares, clothes and more.

GoldenGlitterArt offers a wide range of blinged out foil art prints, you’ll have to dig among all the offerings but there’s several Greek Gods and Goddesses offered (Hades, Poseidon, Athena, Artemis, Aphrodite, Hera, Hephaestus, and Demeter).

SummitCollection offers Greekies, which are hand painted cold cast resin figures of Greek Gods and Goddesses. Artistically, these might be cute statues for a children’s altar.

Additional resources: The Metropolitan Museum of Art has a mini replica of the Three Graces Statue  and a bust of Thalia. The British Museum has a range of Greek and Roman merchandise too. Be sure to peruse the previous entries in the Yuletide Shopping Guide as there is a range of items relevant to devotees worshipping under the Greco-Roman umbrella.

Makers, crafters and DIYers I have been spotlighting in my Yuletide Shopping Guide resources to help you create items related to polytheistic religious traditions. So far that has included cookie cutters, craft molds, and fabric related to Mesoamerica, Ancient Egypt, Ancient Greece and Ancient Northern Europe. I’m shared machine embroidery design files, cross-stitch and embroidery patterns, and today I have knitting and crochet patterns (including amigurumi) to share.

Please let me know if there are any errors, with all the copy/pasting it is easy to make a mistake. If there’s something you think I should spotlight in the yuletide shopping guide, please contact me and let me know. So concludes our fabric resources, but there will be more resources to come! Stay tuned.

Today on the way back from school, I stopped by the printer and picked up the Hades prayer cards (they’re available here). The printer always sends me a proof via email of the card with a colored border on it. Usually they offer two or three options and I pick one. Sometimes that works out and sometimes it doesn’t and today it definitely didn’t.

The other day when I approved the proof online, I selected two different borders: a gold one (which looks awesome) and what I thought would be a deep, dark grey-green. We have had problems before with colors looking one way at the printer and another when I open the files on my laptop and that cropped up again today. When I picked up the cards, the gold border was fabulous. It works really well with the image of Hades. The green border was a pastel mint green. It was rather jarring and I let them know that it looked significantly different from what I’d seen on my screen and we discussed options for next time (I’m probably going to bring my laptop in and work with them awhile to sort this out). The cards were printed though and there was nothing else wrong with them except that the color didn’t quite sit right with me. So I brought them home.

After opening up my mail and getting some tea I laughed and said to Sannion, “well, the Hades prayer cards came in…they’re not quite what I expected.” I pulled out the two sets, “the gold looks wonderful but this one” showing him the mint green and he put his hands to his mouth in horrified shock and blurted out “you have to burn those!”

I sort of stared at him and before I could say anything he continued, ‘I’m not pissing Persephone off!”

At this point I was horrified and I asked him, with some urgency, “is there a taboo against this color and Hades? I don’t think it works well but I didn’t know about any taboo.”

He told me that there was a huge taboo against Hades and any kind of mint, including the color. Why? Because Hades had an affair with a nymph Mintha and this so offended Persephone that She turned the nymph into the mint plant and yes, it’s probably best not to have it around Hades in any way, shape, or form.

[Edit: J. Agathokles provided the full story: “To my knowledge the Host of Many had a relationship with Minthe before he married with Persephone, so it wasn’t an affair per se. However, Minthe did brag that this marriage with Persephone was just a fad and he’d come back to her once the novelty of his bride wore off. Demeter and Persephone then ripped Minthe to shreds in vengeance over this insult, until nothing but the plant bearing her name was left.”]

I immediately apologized to Persephone and moved the mint-green bordered Hades cards to the fire bucket. (I keep an iron cauldron in one corner of my breakfast nook. Anything that needs to be ritually burned goes in there and at the next fire-oriented holy tide, I kindle a sacred fire and burn it all up). Then, after pacing for a few moments, I asked Sannion, “You don’t think I owe reparation to Persephone, do you?” His response was exactly what I would have counseled someone in the same situation, “Probably not, but don’t assume. Do divination and find out.” So I did, invoking both Hermes and my ancestors.

The result: no, I don’t owe any reparation (it was an honest mistake), but I need to be far more careful about such things in the future.

It’s been a good reminder tonight of the need to take care in every detail of one’s practice, not to rush or let the little things slide. They matter and sometimes, as the saying goes, the devil really is in the details. 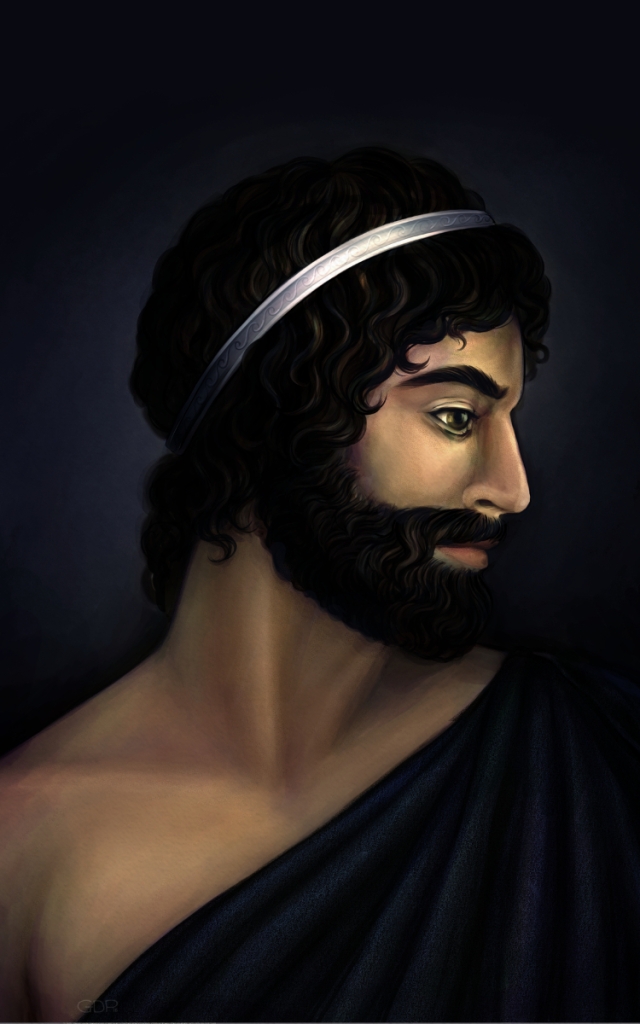 [And speaking of prayer cards, we still need $60 to finish up the fundraising on the Frey card. If anyone is interested in donating toward this project, contact me at Krasskova at gmail.com).

Look what you did! (and an update on Frey)

If anyone is interested in donating toward this prayer card, first check out the small perks offered here, and if you’re game, paypal me at tamyris@earthlink.net. Then email me to claim your perk. 🙂

Finally, look what you all did. The Hades card is finished and will be heading toward the printers as soon as I return from MD. The artwork is by Grace Palmer and also features in the Greek Gods coloring book featured on my etsy site here.

I am still fundraising for the Hades card — I need  $50 to fully pay to have it made and printed. It bothers me from the point of view of respect to have a card for Zeus and a card for Poseidon, but none for Hades. He is the one who gives home to our dead. Let us honor Him.

UPDATE: the Hades card has been fully funded. Thank you so much!

Anyone who wants to donate to this card, I will light candles and offer prayers for the month of January for any ancestor you name. I will do a setting of lights (and for those who have already donated, if you email me names of your dead, I’ll do the same). I do things at my ancestor shrine every night, and I will be happy to include your ancestors in those prayers.

Let’s get this done…Hades deserves to be honored too. I’m sending six cards to each of the sponsors to boot (six Hades cards, or, if you prefer, any six prayer cards you request).

I am also fundraising for Frey. We don’t have a Frey card! I realized this when I was commissioning the coloring books. I very much want to remedy this. He is one of our most popular and most beloved Gods second perhaps only to Thor. I need to raise $450 for Him. Please, please help.

In return, I will do the same: a setting of lights for the month of January for any ancestor you wish. This means near daily prayers for their remembrance, well being, and happiness. For both, if someone donates $100 or more, you will also receive a year’s subscription to Walking the Worlds. Let’s make this happen, folks.