Our world right now is revolving around the developing global-impact story of Covid-19. This is an unprecedented event. In times of stress, it is only natural that we turn to our Gods. Awareness of Their blessings can help us get through the next few weeks, likely to be trying, of quarantine and social distancing–the measures on travel bans, schools and businesses closing or shifting to telecommunications is all about two things: curtailing the spread to protect the most vulnerable in our community, and to slow the spread so we don’t overwhelm our medical services.

To bring a bit of light in a time of anxiety for so many, I thought to give away some prayer card sets for the healing deities, and thought the requirements of the giveaway would be to actually create prayers, artwork, or music to the healing deities from our various polytheistic traditions. It seemed fitting, and a lovely reminder that outbreaks may come and go, but our Gods endure.

draft a prayer, create a visual artwork, or compose a song to a healing deity from a polytheistic tradition 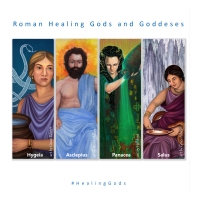 *I have variants for some of the deities in these card sets. So some deity images may differ than what is shown here in the final prize set.

Winner Selection:
Winners will be randomly selected from all valid entries. There will be at least 3 winners, but the more entries, the more winners, up to a final tally of 9 total winners.

Winners will be announced on the blog (krasskova.wordpress.com) by no later than April 6, 2020.  Winners will have until April 22, 2020 11:59pm Eastern Daylight Savings Time to contact me from that announcement with their legal name and shipping address to claim their prize. Failure to do so, will result in a forfeited prize.

Open to worldwide participation. Please keep in mind that as borders close in response to Covid-19, delivery of items might be held up with any impacts upon domestic and international shipping systems.

I encourage those of you who plan to enter, to please use the hashtag #HealingGods.
Let’s fill the internet with our many Gods.

So many people seem to be getting ill lately. I half jokingly said to a friend that June was a really shitty month for people’s health! But no joke, my husband just got out of surgery last week, and I’m hearing of at least three people in my social circle who are either going in for quadruple bypass surgeries or have serious heart issues that were recently diagnosed and the friends I have with chronic pain are beyond number (and I myself live with it every day and it’s been bad of late). I think sometimes that our world is so out of whack that our bodies and psyches absorb it. We wade all the time in poison and pollution and while our bodies do their best, eventually there’s a cost to that, and not just for the patients themselves. The stress and exhaustion visited on their families is immeasurable. So if you’re struggling right now with recent or chronic illness, in yourself or a family member, my heart and prayers go out to you. I want to encourage you to reach out to friends, to your community for support. None of us should have to go through such things alone.

Likewise, I want to thank everyone for the outpouring of support during my husband’s recent illness. It really meant a lot to know how many people were there and holding him in prayer. Thank you.

You know, we have lots of healing deities and in the ancient world many of Them had extensive cultus. I’m surprised that isn’t the case today (though granted, They tend to not be the sexy Deities. Lol. They’re more about hard work and wading into sickness to find a way through). I’d love to hear from people who venerate Healing Deities specifically.

In my home, while I’m Heathen, my husband isn’t so we have a religiously blended household. The Greek and Roman Deities (especially the Roman in my case) get Their share of veneration. But I also honor the Norse healing Deities, and have sporadically for many years. Of course Odin does have “aspects” if you will that venture into healing – the Merseburg Charm for instance names Woden as a powerful healer—but overall that is in no way His primary area of expertise. (1) Or rather, I should say that it is not the way that He has come to me. I hope one day to be able to explore a relationship with Him as Healer, but generally, when one speaks of Norse Healing Deities, Odin is not amongst Those that immediately come to mind.

The most well known of our Healing Deities is probably the Goddess Eir. Many of us associate Her with combat medicine and surgery and She is referenced in the Poetic Edda as the “Best of Physicians.” If we plumb the lore well enough, it becomes apparent that She has many other colleagues in Healing and They’ve gathered a small cultus today. There’s Mengloth, the healer of Lyfjaberg, and an entire retinue of other healing deities with specialties ranging from respiratory care to pharmacy. Goddesses like Hlif, Hlifthrasa, Thjodvara, Bjort, Bleik, Blith, Frith, and Aurboda all have Their areas of expertise. Likewise the Goddess Sunna, governing as She does the healing power of the sun, may also be invoked as a healer. (2) I have also known many to go to the Vanir for such things, which makes sense since They are Deities of life, abundance, and vitality. I myself have two shrines to Freya: a personal one, and then Her image is also included in my shrine to the Healing Deities honored in my home.

I keep wanting to take a month with each of our Norse healing Deities and do intensive meditation, prayer, and devotional exploration with Them but I never seem to manage it, at least I haven’t successfully yet. I hope to do better in the future (I feel the same way about Frigga’s retinue – of which Eir is also a part).

Since I do live in a blended household (and I practice a bit of cultus deorum myself), my healing shrine also has a section devoted to Apollo and Asklepius. The statue of Asklepius came to me on a trip to London. I walked into this store and saw it and got hit with “I need that.” It was so strong a feeling that even though I didn’t have cultus to Him, I bought it and eventually incorporated Him into my shrine. I have great respect for Him. In the ancient world He had a tremendously popular cultus. Apollo, while a Greek Deity, had cultus in Etruria by at least the 6th Century B.C.E. and in Rome by around 431 B.C.E, the latter specifically as ‘Medicus’ or ‘Healer’. Asklepius is the son of Apollo who achieved that rare honor, one shared with Herakles: He was a mortal son of a God who was elevated to godhood, taking His place amongst the denizens of Olympos.(3) I also honor Dionysos on my healing shrine (plus He has His own shrine elsewhere in my home) since He heals issues of the mind, heart, and spirit.

It’s funny: neither Dionysos nor most of the Norse Deities seem to care overmuch for protocols of cleansing before one approaches Their shrines. I mean, one should be clean and of course I wash my hands but They don’t seem to want extensive protocol. Apollo and to some extent Asklepius (though by far especially Apollo here) do seem to require more in the way of cleansing before approaching Them. It’s a completely different mindset when I go to Their shrines and with Apollo at least, there’s much, much more formality.

Someone reminded me that one of the traditional offerings to Asklepius was a black rooster, noting that even as he went to his death, Sokrates’ main concern was that such a debt to this God be properly paid. This time, in exchange for His help I promised not a rooster (I have given Him such in the past), but cultus. I think I’ll use it as an opportunity to do the same for Eir and Her retinue.

Anyway, if you have ongoing cultus to one of our Healing Deities, or would like to share insights or prayers, please feel free to do so here. It’d be a grace and a blessing all around to see Their cultus grow.