I am running a 20% OFF sale on all art, books, bookmarks, and prayer cards in my etsy shop Wyrd Curiosities through January 31, 2021. Use this code to redeem: TGI2021 (or click the link). There’s more than 300 prayer cards available for our Gods and Goddesses across a range of polytheistic traditions: Norse, Germanic, Celtic, Gaulic, Welsh, Roman, Greek, Egyptian, Mesopotamian, and so much more.

Comments Off on 20% Off Sale About to End

I created the Yuletide Shopping Guide in part because Yule is one of my favorite times of year. The guide features items polytheists would enjoy seeing in their homes or under their tree this yuletide. All with the hope of spreading some holiday cheer in a difficult year by finding items that can help feed our devotions within our polytheistic traditions, but also to hopefully along the way lift up some of the artisans in our midst too. So far I’ve included resources for crafters, makers, and DIYers: cookie cutters, crafting molds, fabric (Mesoamerican, Egyptian, Greek, Northern Europe), machine embroidery designs, cross-stitch and embroidery patterns, as well as knitting and crochet patterns. I’ve also highlighted some items on a Krampus theme. I’ve spotlighted items you can use to deck the halls and trim the tree.

There were some artists and artisans who offered a range of product across pantheons, or whose work focuses on a tradition that I didn’t have enough items to spotlight on it’s own. So I highly recommend that you carefully peruse the spotlighted artists and artisans in my miscellaneous Part 1, & Part 2. You will find offerings encompassing a vast array of traditions: Norse, Slavic, Celtic, Roman, Greek, Egyptian, Hindu, Polynesian, Mesoamerican, Minoan, Assyrian, Sumerian, Welsh, Asian, Native American/Inuit, and more!

ArxMercatura based in the Ukraine offers items for modern practitioners of Cultus Deorum with religious statues, libation bowls, shrines, Lares, clothes and more.

GoldenGlitterArt offers a wide range of blinged out foil art prints, you’ll have to dig among all the offerings but there’s several Greek Gods and Goddesses offered (Hades, Poseidon, Athena, Artemis, Aphrodite, Hera, Hephaestus, and Demeter).

SummitCollection offers Greekies, which are hand painted cold cast resin figures of Greek Gods and Goddesses. Artistically, these might be cute statues for a children’s altar.

Additional resources: The Metropolitan Museum of Art has a mini replica of the Three Graces Statue  and a bust of Thalia. The British Museum has a range of Greek and Roman merchandise too. Be sure to peruse the previous entries in the Yuletide Shopping Guide as there is a range of items relevant to devotees worshipping under the Greco-Roman umbrella.

Earlier this year at the start of the pandemic, JR, one of my readers contacted me with a thought, “What if a bunch of us polytheists started a sort of Novena to Apollo to combat this virus?”

Recognizing a great idea, the seed for the Apollo novena was born. Not only is Apollo a God associated with healing, but because he was well known in ancient Greece as deeply multifaceted–with connections to the sun, knowledge, the arts, protection of the young, averter of evil, and so much more–a novena seemed long overdue. 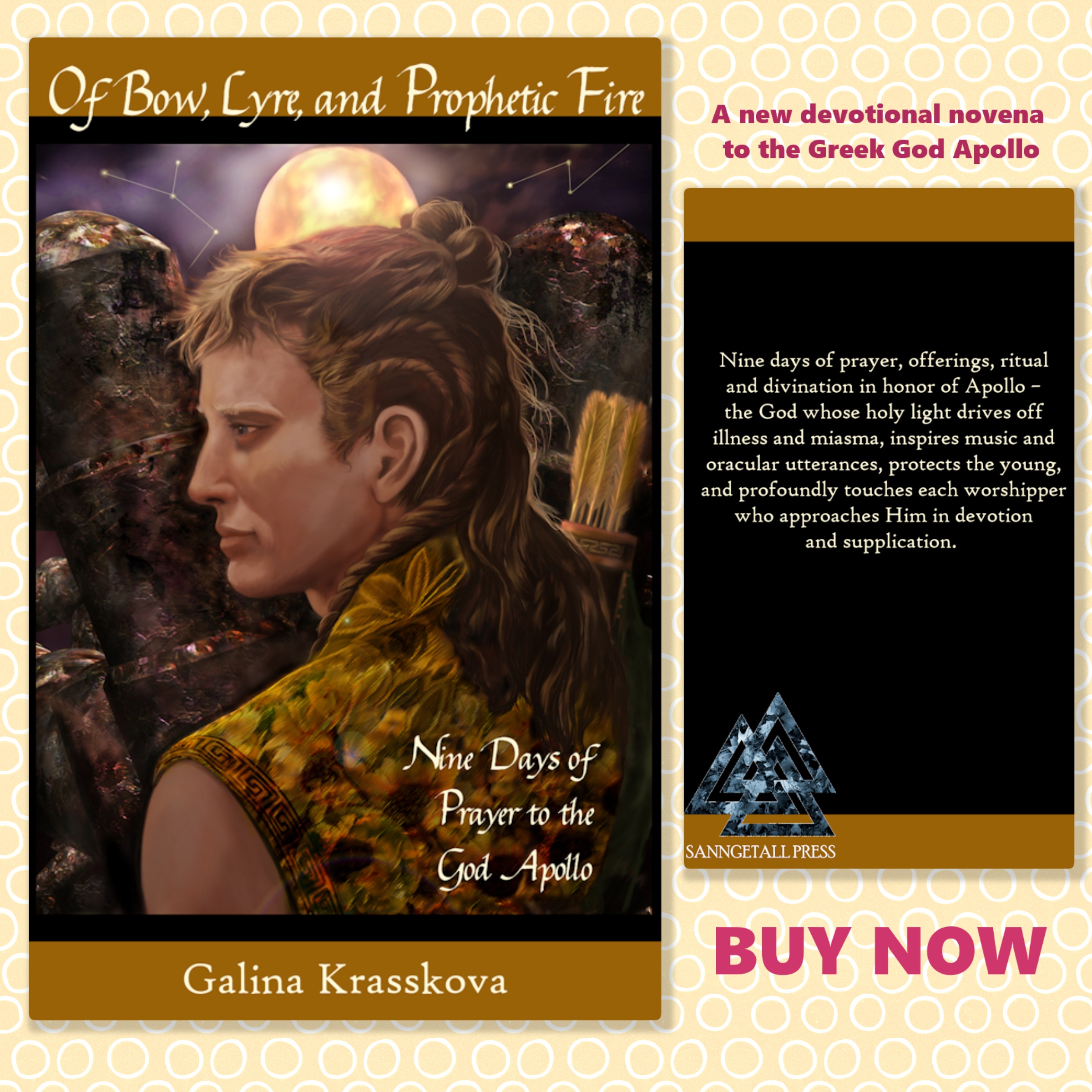 Of Bow, Lyre, and Prophetic Fire:Nine Days of Prayer to the God Apollo

Nine days of prayer, offerings, ritual and divination in honor of Apollo – the God whose holy light drives off illness and miasma, inspires music and oracular utterances, protects the young, and profoundly touches each worshipper who approaches Him in devotion and supplication.

While some content in this novena has been published before in my Hymns and Prayers of a Polytheistic Household, there is also quite a bit of new material including a new divination system.

In honor of the Fourth of July, I’m offering 20% Off everything in my etsy shop. Just click here to get the coupon, which will then be applied at checkout. This sale will run through July 8, 2020.

I have books (including a small selection of texts exclusive to the shop, or the odd autographed book), original paintings, and hundreds of prayer cards for deities from a range of traditions: Egyptian, Greek, Roman, Norse, Germanic, Celtic, Etruscan, Mesopotamia, Baltic, Slavic, and more! There’s dozens of healing deities among the available prayer cards too. 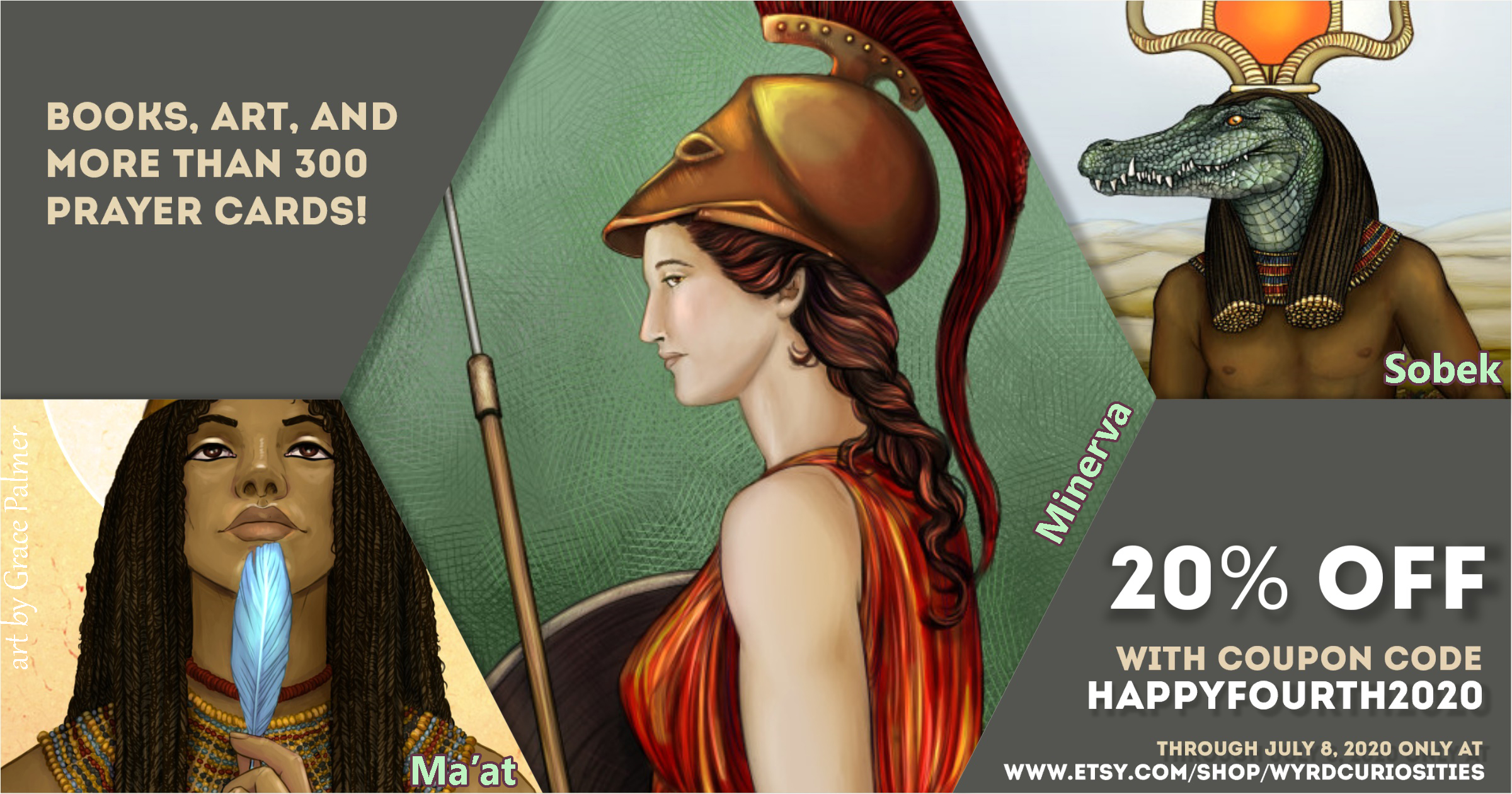 Hitting the Nail on the Head Perfectly

In our previous discussion, Neptunesdolphins hit the nail on the head perfectly, so perfectly, that I am pulling her comment out to highlight it here:

“Sigh, once more modernity and Monotheism strikes again. I know lots of Pentacostals and Catholics who take exception. How else are you slain in the Holy Spirit or see the Mother Mary, unless you engage with God?

Problem is that living in monotheistic culture is that all Gods are false except for the “One True God.” If the Gods and other Divines are treated as fiction, then engaging with fictional characters is considered mental illness. Unless it is pop culture Deities.

The other is that monotheistic thinking flattens the world into human, and only human. Since there is a singularity of life, people cannot imagine engaging with a plurality of Beings. It is beyond their imaginings.

The other thing about tumblr which highlights problems in Paganism – the Deities are smaller than people. People are the Deity. There is no Other, there is only them and themselves.

And of course, Progressivism as it is practiced is a religion. What is happening in Paganism is that everything is being homogenized by Progressivism. So we have the preoccupation with who is a Nazi and who should be thrown out for impolitic thoughts. Monotheism in action – thought crimes and the flattening of thought.”

I couldn’t have said it better myself. I would also emphasize that the attitude expressed on the tumblr page I was discussing yesterday is not limited to Polytheisms. I know plenty of devout Catholics, Orthodox, etc. who have run up against it too. Thing is, their traditions’ structures are able to support and deflect this nonsense far better than ours. We have people taking it in wholesale and building a hollow practice around it and wondering why they’re getting nowhere.

Sigh – “If you have any engagement with the Gods you’re mentally ill.” WHAT?????

I’m afraid I’m going to be very blunt here, because in thirty years of teaching and serving as clergy, I have never seen such utter garbage spreading like wildfire throughout our respective communities as I do now, not even when I first became Heathen (and believe me, the level of bullshit in the Heathen community at that time was a thousand times worse than it is now – and that’s saying something). Part of the problem is the pseudo-progressive contingent on tumblr, and part of it just the sad lack of adequate education in North America today. It’s sometimes hard to see where one begins and one ends.(1)

When someone tells you that actual engagement with the Gods is wrong, that being able to sense or hear Them is mental illness—even one single moment of theophany, that one cannot be claimed by a Deity, called as a priest, function as an oracle, that being a godspouse is mental illness, not only are they completely willfully, and egregiously ignorant of the history of their religion, but they are speaking impiety and attempting to do violence to the pious. They are butchering the religion to fit their own misguided ignorance and attempting to damage those actually building up their traditions. The best advice I can give when encountering such filth online is this: Avoid the impious. Ignore them. Also, consider their motives (2).

Inevitably these people will say “we’re all of equal importance”. Well, no, actually we’re not. Equality is a myth they tell themselves to excuse their own mediocrity before the Gods. We are all unique in our devotional relationships. If, by equality, one means that we are all valued and loved by our Gods then yes that is true; but if by equality one means that we are all exactly the same and that no one has any deeper devotional relationship or more talent in a particular area of religious specialty, then that is nonsense and should be ignored (3). Moreover, it smacks of Protestantism, where demonstrated virtue is a sign of being “elect.” The corollary of course, is that if one doesn’t have a vocation or any of the signs of being “elect” then it means one is of less importance to their God. Well, we’re not Protestant and it’s time we stopped behaving like half-assed Calvinists. Our polytheistic ancestors honored and respected their specialists: those called by the Gods, mystics, clergy, shamans, diviners, oracles, spiritworkers – technicians of the sacred known by different names in different traditions. Why is basic piety so damned hard for us?

We need to strongly resist the push of people more concerned about virtue signaling and politics than venerating the Gods when they attempt to excise from our religions the natural life of devotion. Basically, if it’s on tumblr, it’s probably inaccurate, wrong, and possibly impious. Always, always consider the source. Consider what they contribute. Go to your Gods, go to prayer, and don’t be afraid to tell such people to take a running leap off the nearest cliff (4).