“Another piece of advice to newcomers: ignore naysayers who are not part of our Tradition. The general response of people outside our communities is confusion, bemusement, mockery, or outright anger that some people are once again worshiping the various ancient pantheons. Some people will do everything they can to convince us that practicing a “dead” religion is pointless or that modern Polytheists aren’t “legitimate”. Ignore them. We have nothing to prove to anyone outside our communities. The only opinions that matter are those of the Gods, our respected elders, and ourselves. If someone thinks you’re dumb for worshiping Thor, that’s their problem, not yours.”

May Our Better Selves Be Stronger

One of my readers, Ryan, made a response to my last post about the desecration of Mary statues and the burning of a Church, and it was so beautiful and true I had to repost it here separately. This sums up how I feel so well. Thank you, Ryan, for your wise and thoughtful words.

“Part of me understands why someone would be tempted to do such things. Part of me would love nothing more than to see churches burned and Christian iconography defaced as they once did to our temples and holy images. Part of me wants to say “turnabout is fair play” and shatter their religion until anyone wanting to worship their God has to struggle to piece their faith back together from a pile of ashes as we have had to do. The worst part of me feels this way very, very strongly. But the better part of me knows that is not the way forward. The better part of me knows destroying sacred images damages us all, that some people are called to serve that God, that all sacred images are doorways for the divine, and that to act on such urges would not serve the Holy Powers, but only aid the Filter. I am angry at what was done to our Traditions, at the lies they still try to force down our throats, at the ongoing destruction of our Polytheisms, and I won’t deny that. But I will not let that anger tempt me into blasphemy and serving the Filter. The better part of me is stronger than the worst. I pray that those responsible are brought to justice, and that for every shrine to Mary desecrated, ten more are built and a hundred more flooded with offerings. I will hold fast to the Holy Powers and reject the Ruinous, always.” –Ryan

EDIT: Someone asked me what “the Filter is. It’s an earlier term for that malignant sentience that is aligned against everything the Gods have created, that seeks to tear down, corrupt, and destroy all that comprises the architecture of the Worlds, all that is good, all that the Gods have put in order. The Ancient Egyptian polytheists called it Isfet. I call it the Enemy.

Given the last few [moderated] comments I’ve had to delete from my blog here, I would like to make something clear: those who denigrate the Gods will not be given a voice here. Take your pollution somewhere else.

If you don’t actually believe in and venerate the Gods, if you believe it right to reduce Them to manifestations of human consciousness, to processes and thought-forms, if you are practicing a mish-mash of traditions from which you have excised the Holy Powers you have nothing to say that I wish to hear. Take it somewhere else. This is polytheistic space.

“If you stick a knife in my back nine inches and pull it out six inches, there’s no progress. If you pull it all the way out that’s not progress. Progress is healing the wound that the blow made. And they haven’t even pulled the knife out much less heal the wound. They won’t even admit the knife is there.”

Comments Off on QOTD

“Monotheism is a disease of the soul, and even the kindest, most open minded Monotheist who finds the idea of forced conversion ghastly is still a carrier for spiritual plague. I have friends and family who are Monotheists who I love dearly, but I never let myself forget that they are infected and see the spread of their infection as both good and necessary. As decent moral people we should respond to kindness with kindness, but we should also never forget that at its core, Monotheism desires death to all other religions.” 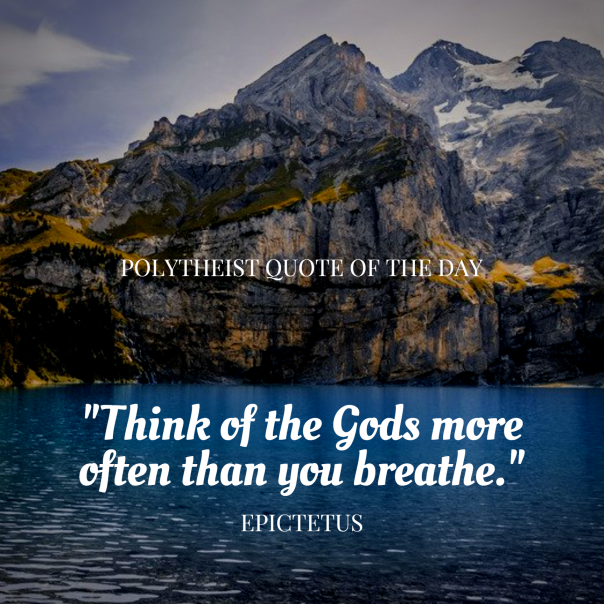 Prayer is one of the most important pillars connecting us to the Holy Powers. If you can erode that, you can make these traditions irrelevant. Unlike sacrifice and mysticism, prayer is something anyone and everyone can do, so that’s why they fight so bitterly against it, because otherwise, why do the nay-sayers care.”

“If you want to pretend to be a Viking, there’s the SCA. If you want to enjoy Viking Metal, there’s tons of concerts and festivals for you. But if you’re going to say you are a member of the religion, then there is PRAYER, there is VENERATION, there is SACRIFICE, there are OFFERINGS, and yes Virginia, there are GODS, many of them in fact. Let us not forget that the Gods exist beyond the confines of the “lore” too. They’re not powers confined to the pages of a text.”  —Wyrd Dottir

Comments Off on QOTD

The most tragic thing for a nation is to have no memory.

(We were watching a documentary today on China’s one child policy and one of the people interviewed said this, a sentiment with which I quite concur. It occurred to me this is alwayswhat communism did as soon as it came to power: destroyed your thinkers, intellectuals, artists – your keepers of collective memory. They did so for the same reason that Daesh destroys polytheistic temples and religious items: so that for the generation that follows there will be no clue that things were ever different than what the party says it is and has been. It’s obscene, and this is what way too many in our communities and in our country today want to embrace. Maybe read a little history and reconsider).

Hitting the Nail on the Head Perfectly

In our previous discussion, Neptunesdolphins hit the nail on the head perfectly, so perfectly, that I am pulling her comment out to highlight it here:

“Sigh, once more modernity and Monotheism strikes again. I know lots of Pentacostals and Catholics who take exception. How else are you slain in the Holy Spirit or see the Mother Mary, unless you engage with God?

Problem is that living in monotheistic culture is that all Gods are false except for the “One True God.” If the Gods and other Divines are treated as fiction, then engaging with fictional characters is considered mental illness. Unless it is pop culture Deities.

The other is that monotheistic thinking flattens the world into human, and only human. Since there is a singularity of life, people cannot imagine engaging with a plurality of Beings. It is beyond their imaginings.

The other thing about tumblr which highlights problems in Paganism – the Deities are smaller than people. People are the Deity. There is no Other, there is only them and themselves.

And of course, Progressivism as it is practiced is a religion. What is happening in Paganism is that everything is being homogenized by Progressivism. So we have the preoccupation with who is a Nazi and who should be thrown out for impolitic thoughts. Monotheism in action – thought crimes and the flattening of thought.”

I couldn’t have said it better myself. I would also emphasize that the attitude expressed on the tumblr page I was discussing yesterday is not limited to Polytheisms. I know plenty of devout Catholics, Orthodox, etc. who have run up against it too. Thing is, their traditions’ structures are able to support and deflect this nonsense far better than ours. We have people taking it in wholesale and building a hollow practice around it and wondering why they’re getting nowhere.