It is with deep sadness that I woke today to find that my friend and mentor Ochani Lele had died. He has had a rough couple of years and six weeks ago, he took a bad fall in his home and was {mis-}diagnosed with a torn rotator cuff. When the pain did not cease, he returned, several times to the doctor and finally demanded tests, which his doctor did five weeks later. It turned out that he had a broken neck but during the course of treatment, doctors discovered he also had stage four cancer. He was immediately moved to hospice where he passed away yesterday (November 27) at 7:30 in the morning. He was with his dear friend, Flavia, a child of Yemaya, who is now taking care of final expenses.

Stuart impacted so many people, both within Lukumi and without. He was generous to a fault with his time, constantly offered classes and wrote books trying to help those who wanted to learn how to honor the Orisha better, to live their lives more fully, to develop as pious, devout human beings. His work as a diviner was extraordinary and above all else, he was a gifted and good man. He will be missed, and the world is a poorer place without him here.

May the Orisha receive him and may he eat honey out of their hands.

For those wishing to donate to his final expenses, you may do so here. My house has given what we can.

I just found out today, that Ochani Lele, a noted santero, diviner, and author is in hospice having been diagnosed with stage 4 cancer. I don’t know how long he has, but it does not look good. This man has lived his life devoted to the Orisha. He has taught, exhausted himself in mentoring, and helped countless people, not just those who honor the Orisha, but people like me too, who came to him for assistance or training. He literally saved my life with his counsel a few years ago, and helped me to hone and improve my divination skills too, which benefits my Gods and spirits and you. He is a treasure. Every elder is a treasure, a library, a living repository of the wisdom and power of their tradition. 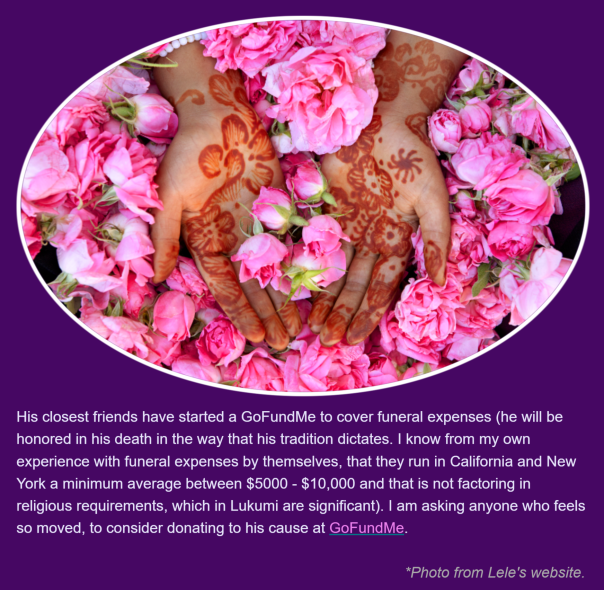 We are charged with honoring our elders and we are charged with burying our dead. I have given what my household can afford at this time and now I go to petition my ancestors that they may pour blessings upon him.