Modern Guide to Heathenry is Now Available in the UK

To my British fans, today (January 25, 2020) is the UK release of A Modern Guide to Heathenry: Lore, Celebrations & Mysteries of the Northern Tradition from my publisher Red Wheel / Weiser Books! Some of you were impatient and imported the book already, for the rest of you, happy book release day!

The book takes what I created in Exploring the Northern Tradition: A Guide to the Gods, Lore, Rites, and Celebrations from the Norse, German, and Anglo-Saxon Traditions (2005) as a foundation and significantly expands upon it with more than 70,000 words of new material especially on devotional work, honoring the ancestors, and theological exegesis. It’s basically twice the word heft of its predecessor! 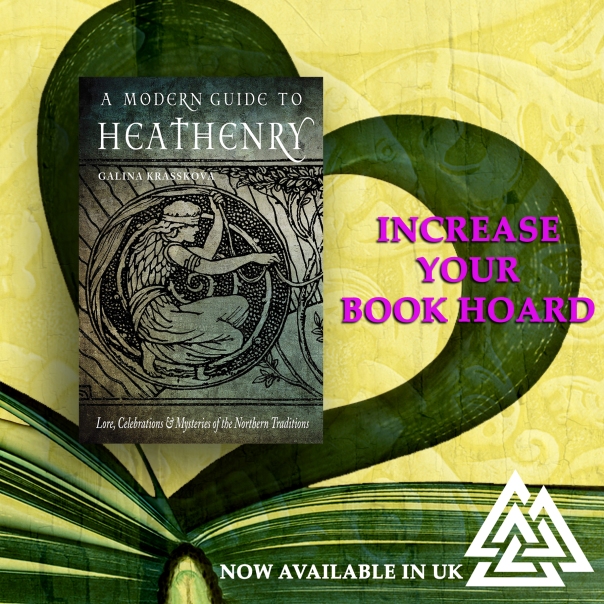 What the Back Copy Says:

Heathenry, is one of the fastest growing polytheistic religious movements in the United States today. This book explores the cosmology, values, ethics, and rituals practiced by modern heathens.

In A Modern Guide to Heathenry readers will have the opportunity to explore the sacred stories of the various heathen gods like Odin, Frigga, Freya, and Thor and will be granted a look into the devotional practices of modern votaries. Blóts, the most common devotional rites, are examined in rich detail with examples given for personal use. Additionally, readers are introduced to the concept of wyrd, or fate, so integral to the heathen worldview.

Unlike many books on heathenry, this one is not denomination-specific, nor does it seek to overwhelm the reader with unfamiliar Anglo-Saxon or Norse terminology. For Pagans who wish to learn more about the Norse deities or those who are new to heathenry or who are simply interested in learning about this unique religion, A Modern Guide to Heathenry is the perfect introduction. Those who wish to deepen their own devotional practice will find this book helpful in their own work as well.

Available For Purchase from these and other booksellers