A thing came up today amongst some colleagues: the difficulty of loving savage Gods. I belong to Odin: I know a thing or two about loving in the midst of Terror. A friend said “but He’s only ever kind to me. Why honor Him in His savage aspects, why not just focus on the beautiful?” Oh what a powerful question, and one that I have seen arise again and again and again.

We are fragile and sometimes hurting so deeply and the Gods are so big. We carry our hurts like a grey fever in our bones, and when there has only been hurt for so long in our lives, how can we not flinch and flee a Terror so much beyond any human fist or scathing word, or yelling voice? Gods are supposed to be nice and good and never, ever angry aren’t They? Why not just call upon Them in the sweetest of guises and avoid the cognitive disconnect (and fear) all together? Why risk one’s world of devotional safety being breached?

Well, there is an answer–at least I have found one loving Odin as I do– and I’ll share it with you now. In truth though, I suspect that this is a devotional hurdle that every devotee will likely have to surmount on their own. Why love and honor the Gods when Their face is terrible? Because not doing so truncates one’s potential relationship with that God. Because terror is subjective and for some of us, our Gods are most beautiful when They are the most terrifying.

When someone comes to me, either having gotten their first glimpse of their Deity’s more savage face, or having encountered someone for whom that is simply the way that same God is, this is what I tell them:

You are not alone in being disturbed when encountering one of the fiercer faces of a God. It is difficult to see such a different manifestation of a God so close to one’s heart. It doesn’t negate the gentleness and kindness with which that self-same God may come. It fulfills it. It enhances it. It renders those things an even deeper grace. That a God can be fierce and harsh but chooses not to be so with a particular devotee, oh that is a blessing. And likewise if a God does present a savage face, I think that is also a blessing – it is showing a tremendous amount of trust in the devotee that such a one is able to stand in the furor still rejoicing. Every aspect of our Gods is a blessing, as far as I’m concerned. I would not shut the door to a single one, even if it means I stand in terror until my bones ache. My heart will still be rejoicing because in doing so, I have glimpsed a Mystery.

A God’s nature is manifold and varied, and be He kind or be He savage, it is all part of the God Himself (and Goddesses can be every bit as fierce but the conversation I initially had today involved a God). To love and venerate a God means loving and venerating ALL of that God, not just the parts that don’t challenge us. That is what devotion is all about and it can be really, really scary.

You may never, ever be called upon to engage with your God – be it Odin, or Dionysos, or Sekhmet, or any other Deity as a ferocious and terrifying God; and that is perfectly ok. I very much believe that the Gods know best how best to come to us. We need different people engaging with different facets of our Gods … as many as possible because each of us is a window for our Gods onto this world. There is work and devotion that only you can give, and only I can give and only devotee X can give, etc. and if we choose not to do it, we will be failing our Gods. We will also be failing ourselves and maybe even failing our fucked up world as well.

So if your God is not asking you to venerate Him as a terrible God, awesome. But He does ask it of some because that medicine too must be loosed on the world. We need it, desperately. It is transformative in a different way from the kindness, liberating in a different way from the gentleness and there are some aspects of our world’s dysfunction and dis-ease that only such terror can cure; …

and Their terror is beautiful, breathtaking in ways I lack the skill with words to tell. We must be brave in our devotions, brave in loving Them, even when our souls quiver in terror. We must move from a place of trust. That is the core of devotion and if it is lacking then everything else is for naught. These things are Mysteries. Even if I am never called to engage with the Gods (other than Odin) I love in this way, I am glad these Mysteries exist. I am glad too that Odin has allowed me to see a whisper of His savageness. It is holy. 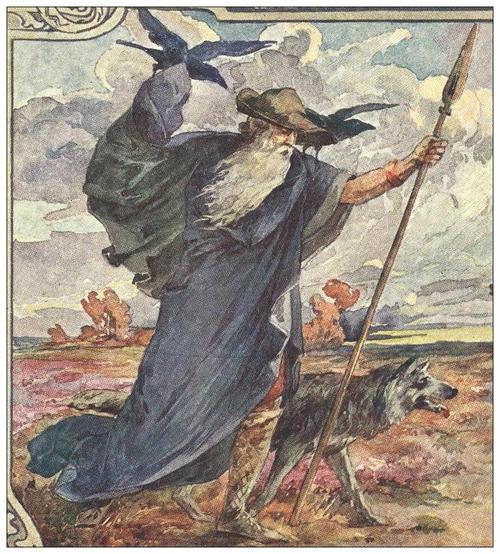